A friend of mine posted a question that not so much tickled as poked my fancy:  Who is your favorite disciple of The Twelve? I’d never asked myself this and drew a complete blank for at least a week.
The first glimmer came with considering who I identified with rather than who I liked. Oh, okay, now we’re getting some traction.
First one was easy peasy – Thomas, known through the millennia for his ‘Doubting.’ Trusted friends, comrades in the struggle who had, every one, laid his life and death on the line for the young preacher boy/miracle man from Nazareth – all said that he was somehow back, somehow alive, after his execution which they’d all witnessed.

Thomas had seen the bloody pulp the soldiers had reduced Mr Gonna Save the World to–his friend, the leader of their merry roving band.
Crucifixions were then part of the everyday scenery, routine as handcuffs now – the Romans lined the main roads with the gory dying, with their groans and the stench of their blood, urine and excrement.

A daily gentle reminder of who was in charge and the consequences of not being a good boy.
So Thomas, out of his rich store of memories of this tortuous mode of dying, responded to his friends’ claims with ….. “Yeah, right.”

But hey, he was a reasonable man and willing to consider evidence. Hard evidence. “You know what? I’ll believe this story if and only if Jesus stands right here in front of me and lets me stick my finger into the nail holes in his hands and poke my hand into the hole where we saw the soldier stick his spear up into Jesus’ heart. Yeah, that will convince me.” (John chapter 20, loosely.)
He was no soft-sell. None of this ‘reliable witness testimony’ would do it for him.
So, how did his supposedly back-from-the-dead leader respond to the doubt he was flaunting? This was not misgiving, not cautious hesitation, but a demand for an empirical verification of the impossible. Did lightning strike, did the earth swallow him up, did his skin instantly break out in leprosy?
Well, much more dramatic than any of that.

A week later, when some of the disciples had gotten together secretly (they were in hiding from the authorities) Jesus himself suddenly materialized and stood there in front of his friend Thomas and said–“Okay, here I am, come on, do it. I invite you–seriously– use your fingers and hands on these wounds that killed me. Just stop disbelieving and trust me.”
Thomas’ response? A very simple declaration. We don’t know if he sputtered it out, or shouted it, or whispered it. “My Lord ….. my God”–thus becoming a star witness for his many fellow skeptics through the ages who struggle with the enormity of this claim–the Lord is risen!

So, as his gift to us, we the many doubters through the centuries get to join our brother and fellow believer Thomas in his cry, whether loud or soft–my Lord . . . my God!

There is therefore now no condemnation for those who are in Christ Jesus. Romans 8:1

I was sitting on my green sofa in my dimly lit living room. That’s how I spent most of my time. The doctors kept trying new chemos on me, then a bone marrow transplant, then more chemos. Then yet another transplant.  Nothing was working.

Sitting there day after day, often nauseous for weeks at a time, I learned to pray as I’d never done before. “This poor man cried out to you… ” The first clause of Psalm 34:6 became real. Would the rest of it? “…and the Lord heard him and delivered him from all his fears.” Not sure what that would look like. Yes, heaven is a deliverance into the arms of God for a dearly loved kid of His. “Absent from the body… present with the Lord.”

Yet it did not seem to me to be ‘my time’ yet. There was so much restoring that I yearned for in my family and in my world.

At my church we were spending a lot of time exploring the meaning and impact of the grace of God. It’s a phrase that tumbles easily off the lips of many Christians–and yet churches are filled with roiling oceans of hurt, maladjusted, arrogant, and sometimes just plain mean people.

Before my diagnosis, I had already watched as my world crumbled. There was so much shame, and grief, and regret. Even before the doctors spent month after month scratching their heads over my case, I felt trapped and craving rescue from “this body of death”–the numb, zombie-like existence of a human smoldering wick.

One day as I sat on that green sofa with bright shafts cutting through the half-lit room from the vertical blinds, a speck of dust caught my eye. It seemed to be riding down the beam, sliding down, in slow motion. For some odd reason, I was intrigued by this little drama.

It was a splash of intense illumination into my murky world. NO condemnation. Not “only a little” condemnation or judgment. But … Zero. Shame. None, as in–none. No accusing voice that will not be satisfied and cannot be silenced.

The very last words of Jesus, moments before he died on the cross–“It is finished.” Not “almost” finished or “mostly” finished. “Finished.” All that nasty, crushing load–gone.

This struck me last year in such a bizarre, unnerving way . . .

Every branch gets cut.  No exceptions.

Some get tossed into the heap and burned.  Some–the ones producing delicious fruit–get . . . whacked back.  Excuse me?!

Isn’t the thought of being sawn back to a nub Because You’ve Been Doing the Right Thing more than a little strange?  Yes–unless you’ve worked with plants. 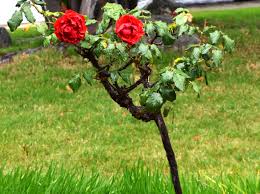 Exhibit B–rose bush that’s bounced back from the pruning.

Imagine the fragrance coming from the roses in this second picture.

There’s nothing about being cut back that appeals to a healthy mind. This is why it requires the kind of trust in the gardener that includes a long view of things.

“And do you really love him quite well enough? Oh, Lizzy! Do anything rather than marry without affection. Are you quite sure that you feel what you ought to do?”

“Let me know every thing that I am to know, without delay. Will you tell me how long you have loved him?”

“It has been coming on so gradually, that I hardly know when it began. But I believe I must date it from my first seeing his beautiful grounds at Pemberley.”  ~~Pride & Prejudice, Chapter 59

Lizzy thought badly of Mr. Darcy, mostly because of how a deceiver had spoken of him.  Her heart began to change when she saw Pemberley–saw the grounds, saw his portrait and cameo with a benevolent expression, heard the praise of a long-time house servant who spoke warmly of him.

These things did not fit the villainous picture  given her by Mr. Wickham.  Her confusion was not resolved by understanding that the one she’d believed was telling the painful truth was himself a confirmed liar.  She discovered this first by Wickham’s treachery regarding her own sister and then by the revelation of his earlier behavior toward Darcy’s sister. The reluctantly delivered confidences were finally seen to be a smear campaign.

Wiping away the lies did not, however, kindle love.  It took being on the grounds of her potential inheritance and having glimpses of how generally happy the people were who lived under his care.  It seemed to be a grand yet comfortable place to live.  Outsiders misunderstood him, an enemy misrepresented him, but those close to him loved and respected him.

Isn’t this a lot like our experience of God and the enemy–we get half-truths combined with outright lies delivered smoothly to us by someone with a slighted ego who is brimming with evil intentions.

Up to a point, the lies make sense.  But then we get to meet the Lord of the manor on his own turf, on his own terms, and see the inheritance he offers–a mansion, a grand house.  By reasoning backward from the enormity of his offer, we begin to realize what a grand person he must truly be.  And how lovely it would be to be his bride.

Things that go through my head